Is it possible to replace high-dose Cu-supplementation in piglet feeding by activated trace minerals (MAXACTIVAT/Cu) which have been generated from a superior patented activation technology?

Healthy piglets are a cornerstone for high zootechnical performances and success in modern pig production. Post-weaning diarrhea caused by pathogenic bacteria (e.g. E. coli) is one of the most prevalent symptoms in piglet rearing worldwide. The objective of a current study was, to assess if activated Copper (aCuO), is an option to replace high-dose Cu-supplementation to prevent diarrhea in weaned piglets and therefore a proven nutritional tool and environmental friendly solution.

The effect of adding MAXACTIVAT/Cu to piglet starter feed was tested in a recent feeding trial. At 25 days of age, 200 weaned piglets (DanAvl x Duroc, mixed sexes) were allocated into a flatdeck with 8 pens, containing 25 animals per pen. Pigs were divided into three groups (negative control, positive control and treatment). The duration of the trial was 14 days, raising the pigs from approx. 6.3 kg to 8.5 kg of live weight (LW).

Animals of all groups received a piglet starter feed, composed of soy, corn, wheat, rye, barley, mineral feed and highly digestible protein sources. Feed was administered ad-libitum through liquid feeders. The negative control was supplemented with 15 ppm sulfate, while the positive control received 140 ppm copper sulfate. Feed of the treatment group was supplemented with 140 ppm of aCuO. At the beginning and at the end of the 14 days period, body weight and feed consumption per pen was measured and feed conversion ratio was calculated.

The improved diarrhea inhibitory effect of MAXACTIVAT/Cu is a consequence of the modification of particle size, surface activity and free excess energy caused by the mineral activation technology. Due to growing environmental awareness there is a clear demand for such innovative solutions like MAXACTIVAT/Cu for prevention of post-weaning digestive disturbances, especially those related with E. coli. 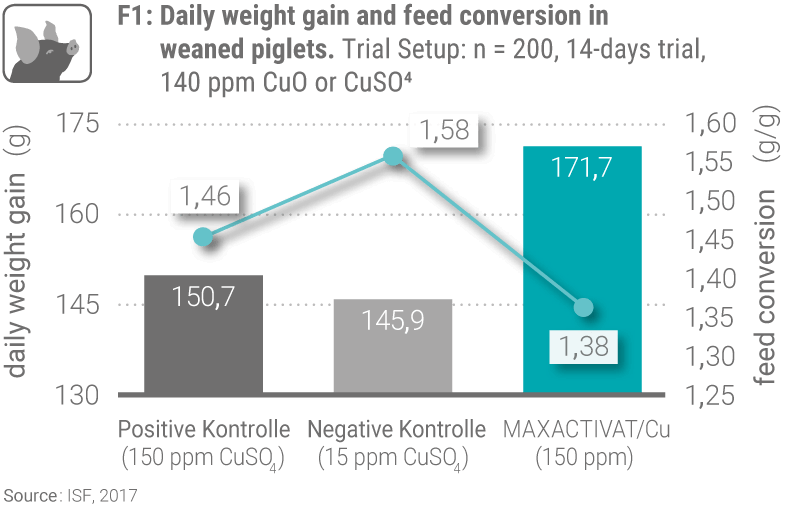