Forms a biological protective lining in the digestive tract

MAXLAC products are composed of probiotic feed additives from the lactic acid bacteria (LAB) group. The strains are healthy and natural, tested for safety and efficacy, GMO free and certified for organic farming in the EU. They support high zootechnical performance in livestock nutrition and promote multiple nutritional advantages in the diets of monogastric animals. 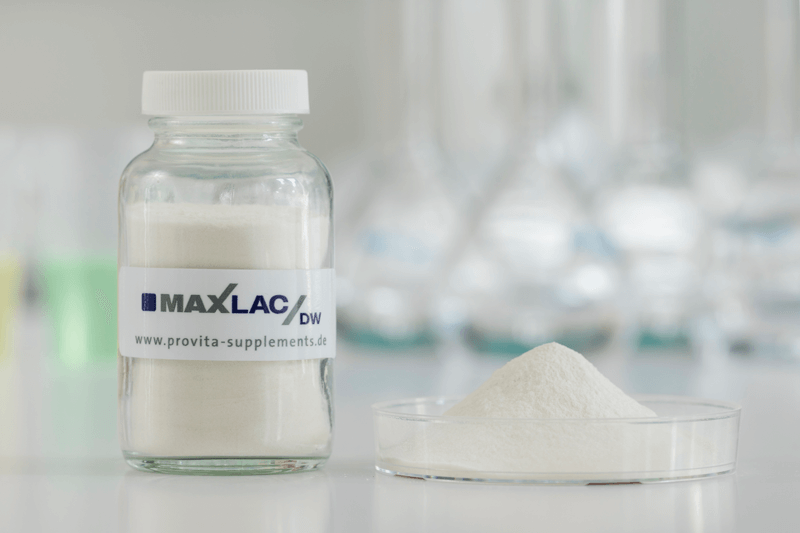 MAXLAC/PELLETS is a well-proven probiotic used in sow and piglet feeding, and pig and poultry finishing. The product contains the highly effective lactic acid bacteria strain Enterococcus faecium (DSM 7134). The MAXLAC pellets are micro-encapsulated and therefore particularly resistant to heat. 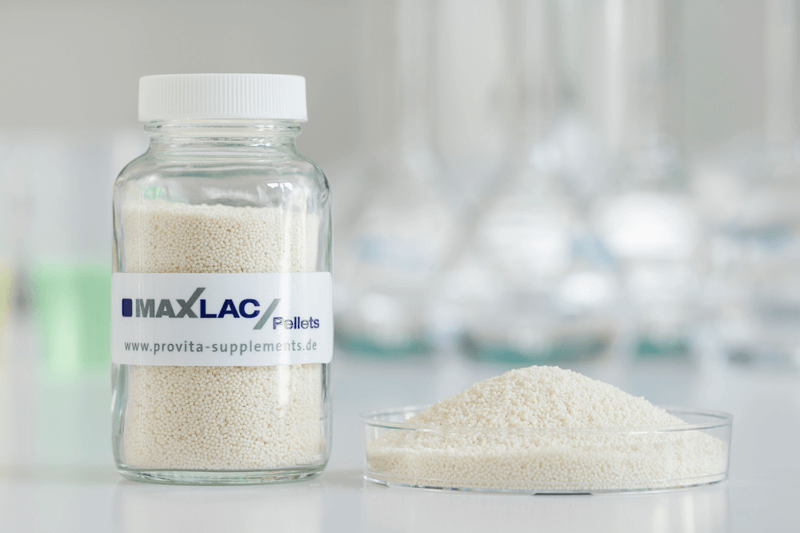 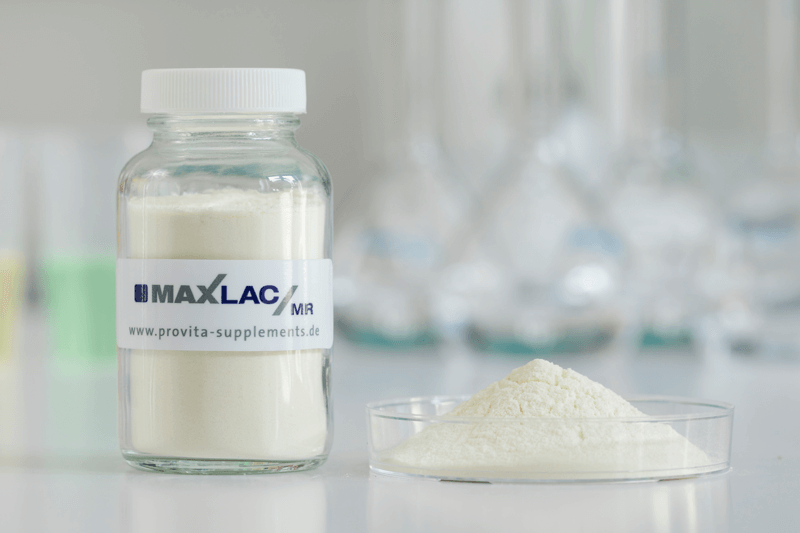 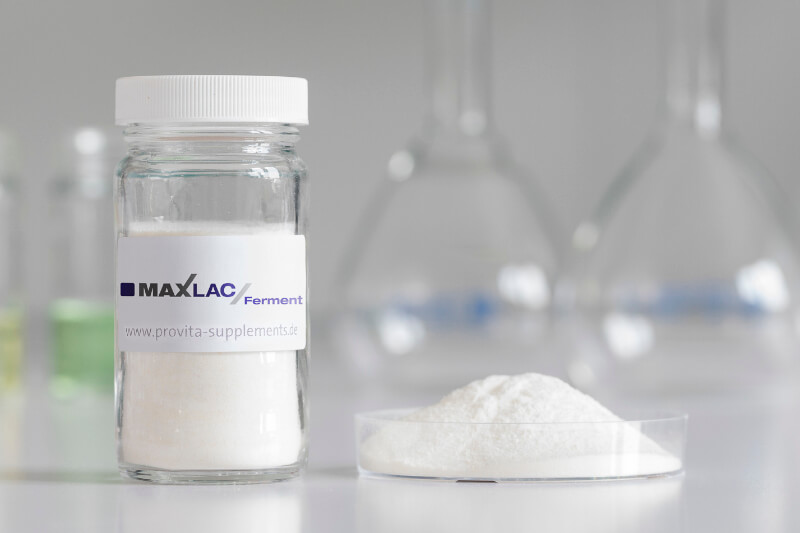 Dietary probiotic supplementation has become increasingly important in recent years due to a steady reduction in antibiotic usage. The major commercially available probiotic products for animal nutrition include lactic acid bacteria, spore-forming organisms and yeast strains. A healthy intestinal tract is crucial for superior performance in today’s monogastrics and ruminants because maximum productivity demands require high levels of feed intake and feed efficiency. Probiotic bacterial cultures are key elements of modern feeding programs in livestock and poultry production as they have a regulatory and stabilizing function in the intestinal track. Their main effect is to stimulate desirable bacteria in the intestinal flora and to protect the intestine from undesirable microorganisms. Since it is commonly known that microbiota health is strongly correlated to the immune status of the gut, it may be concluded that probiotics give rise to a healthy immune system and promote optimum animal performance.

Supplementing with lactic acid bacteria helps deliver improved animal performance, and there are synergistic effects when MAXLAC products are combined with other products from our portfolio. For example, combining probiotics and acids has been shown to provide benefits in broiler chicken and pig nutrition. Figure 1 shows improvement in feed conversion and daily gain of weanling piglets when their diets were supplemented with MAXLAC and medium-chain fatty acids (MCFA) from the MAXACID product range. Combining dietary MCFA and probiotic supplementation in weanling pigs are efficacious alternatives to antibiotics to improve health status and performance. 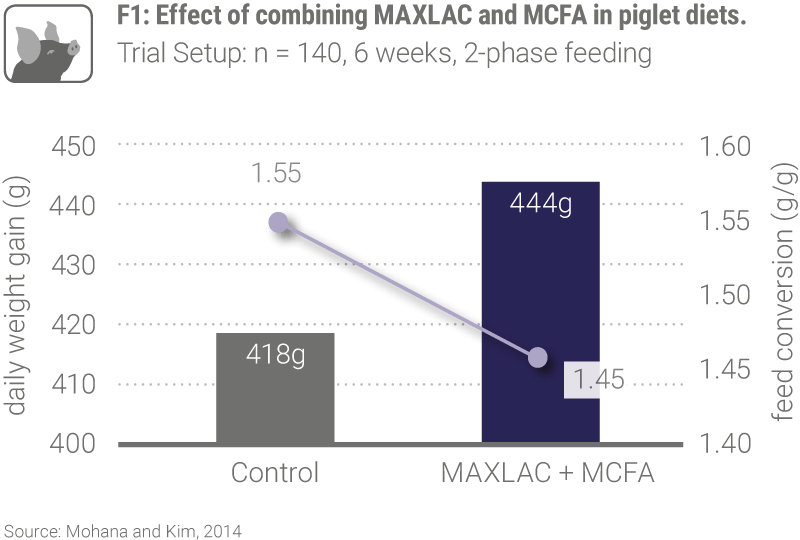 MAXLAC/PELLETS is used in sow and piglet feeding, and pig and poultry finishing. Many trials and research studies demonstrate the positive effects of this probiotic feed additive, including improved piglet survivability and increased pre-starter feed intake per piglet, and improved body condition in sows. In addition, supplementing MAXLAC/PELLETS increases daily weight gains in piglets and improves their vitality. In poultry, it has been shown to provide a significant increase in live weight gain. 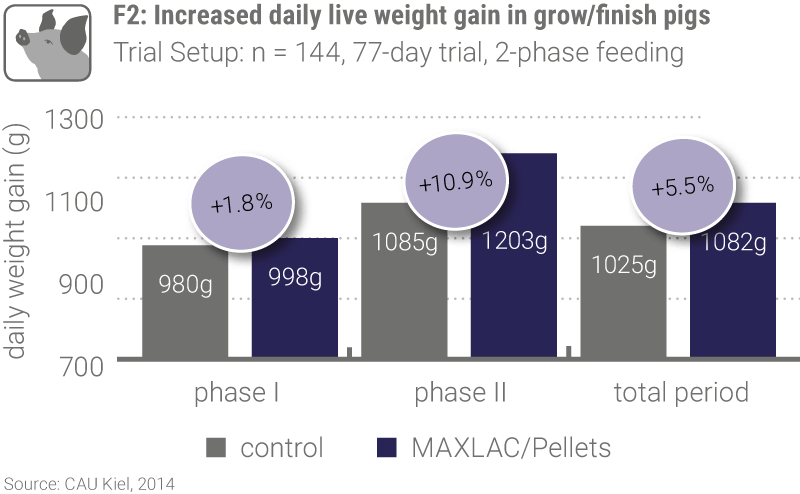 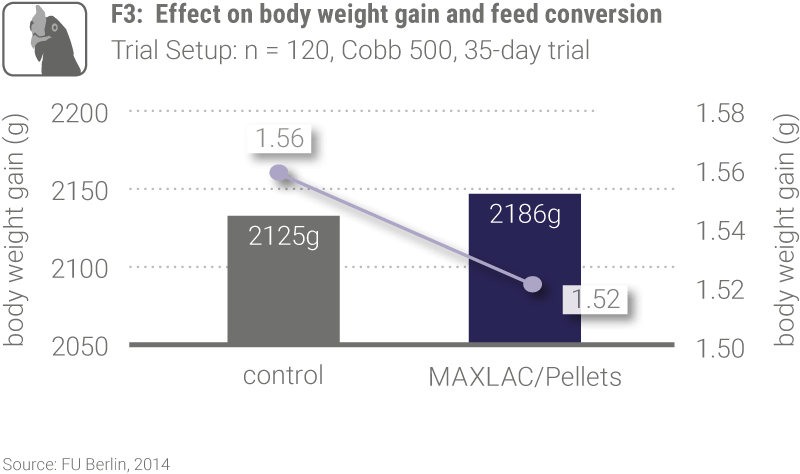 MAXLAC/DW THE PROBIOTIC FOR DRINKING WATER

MAXLAC/DW is a highly soluble powder that can be administered via drinking water, and it is primarily used for poultry and pigs. It contains the highly effective lactic acid bacteria strain Enterococcus faecium (DSM 7134), which stabilizes the intestinal flora and improves the performance of the host animals. In pig and poultry feeding it has been shown to significantly increase daily weight gains. 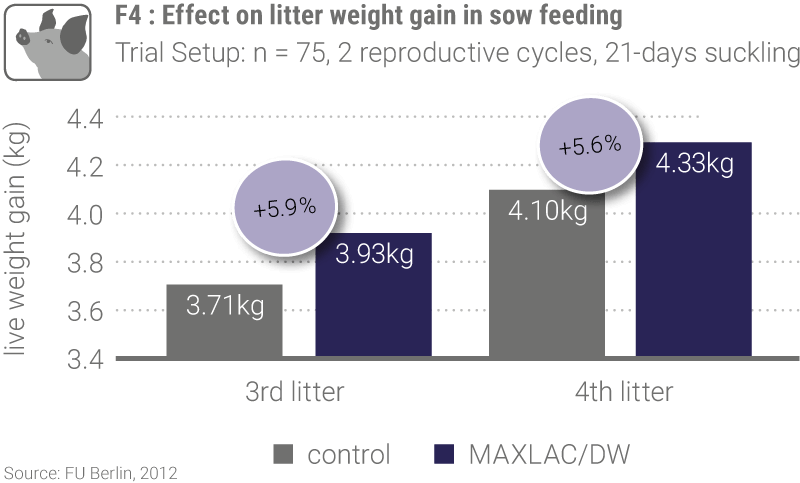 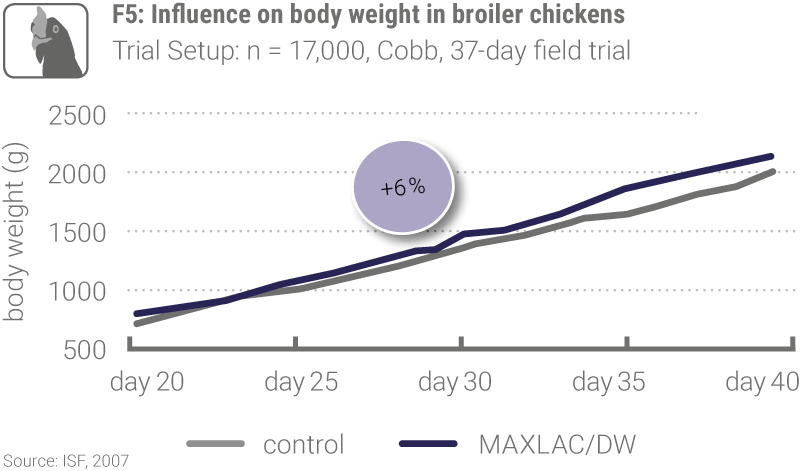 Various research institutes have analyzed the effects of MAXLAC/MR on calf daily weight gain. Figure 6 shows that MAXLAC/MR leads to a significant increase in daily live weight gain in calves, which is the result of an improved energy conversion and increased feed intake. Further research studies at the University of Applied Sciences in Bingen aimed to analyze the effects of MAXLAC/MR on respiratory infections and diarrhea of 80 Simmental calves that were divided into two groups. MAXLAC/MR increased daily feed intake by 11.1% compared to the untreated control group. Furthermore, MAXLAC/MR had a positive effect on feed intake during the nursing phase, which still was noticeable in the phase after weaning. The daily dry matter intake after weaning was 5.8% higher for the treated calves compared to the control group. Results on immune status, illustrated in figure 7, show that MAXLAC/ MR significantly reduced the average number of days calves experienced diarrhea and respiratory infections compared to the control. 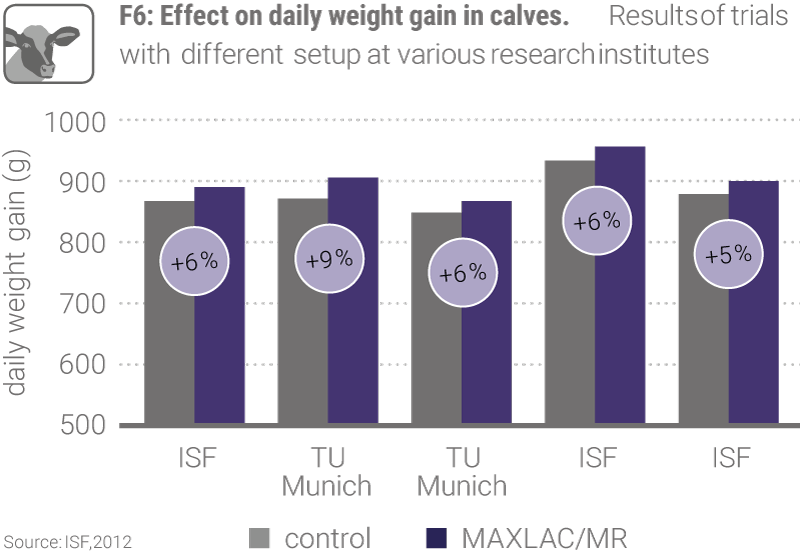 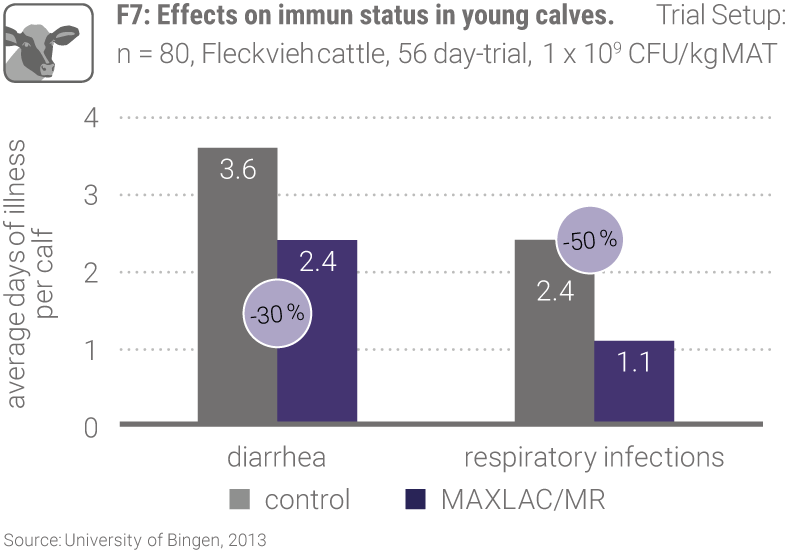 Data from a challenge trial suggests, that MAXLAC/AQUA can help to prevent mortality related with Early Mortality Syndrome (EMS), when applied at a rate of 0,5 mg / g of feed. The survival rate improved from 19,3% to 86,1% compared to the positive control and there was no significant difference observed, when comparing the treatment group to the negative control, which was not challenged with EMS. 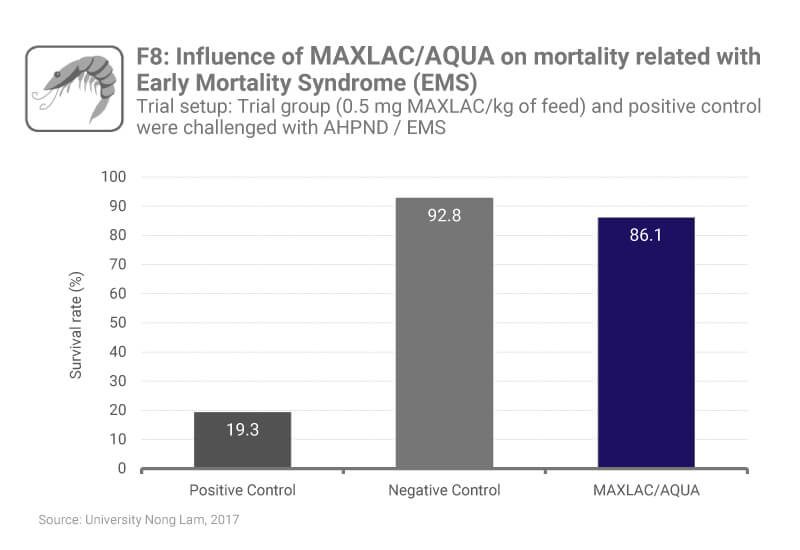